Silver coins including bullion and circulating currency are among the many silver items GoldFellow® purchases from consumers.  An example of a current silver bullion coin is the Silver American Eagle which contains 1 Troy ounce of .999 fine silver. 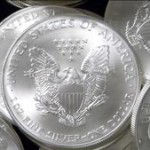 An example of circulating silver coins are US Silver dollars, half dollars, quarters and dimes minted between 1932 and 1964.  Coins minted during that time period contain 90% silver alloyed with 10% copper which adds strength and durability.

Silver coins have been used as currency for over 4,000 thousand years.  In the 15th century, the Spanish Peso de a Ocho (the famous “pieces of eight”) otherwise known as the Spanish dollar was introduced.  This silver coin widely used in world trade for 400 years contained one troy ounce of silver.  Today, some of the most popular .999 fine silver coins include the American Silver Eagle, Canadian Silver Maple Leaf, Mexican Silver Libertad, Chinese Silver Panda, Australian Silver Kookaburra and Silver Kangaroo and the Austrian Silver Vienna Philharmonic.