With gold’s value on the rise, people have been looking to their old jewelry to make some cash. Suze speaks with Michael Gusky, owner of Goldfellow, who explains the different types of gold and what they’re worth. 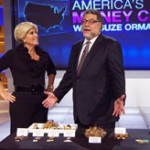 Cash for gold buyer, GoldFellow®’s founder and CEO, Michael H. Gusky appeared as a guest expert on gold buying on an episode of the original series “America’s Money Class with Suze Orman.”  The episode first aired Monday, January 30, 2012 on the Oprah Winfrey Network. Gusky, a 30+ year gold industry veteran, showed viewers and members of the live studio audience how to find hidden money by identifying items containing precious metal in their homes and to understand the value of their gold.

Personal finance advisor and best-selling author Suze Orman taught a six-week master class on money in front of a live studio audience. The theme of the show GoldFellow® participated in was “hidden money.” As gold prices soared over the last 4 years, many consumers have found hidden money in their jewelry boxes, junk drawers, safe deposit boxes, attics, basements and garages in the form of old, ugly, broken or out-of-style gold jewelry, tarnished sterling silver teapots and gold coins and bars.  High gold prices have contributed to the increase in people who want to sell gold – and to the proliferation of cash for gold buyers.  Not all gold buyers are alike.  GoldFellow® has a reputation as a trusted gold buyer based on its transparent business practices and an A+ rating from the Better Business Bureau.

“I am so proud GoldFellow® was selected as the gold buyer for Money Class,” said Gusky.  “It has always been our company’s mission to educate consumers about gold value and this was a great opportunity to raise public awareness of the value of old, ugly, broken and out-of-style gold jewelry.”

GoldFellow® executives have often been sought out by the media for comment and background for news stories about selling gold and the cash for gold industry.  But, in the case of his appearance on “Money Class” Gusky was personally able to demonstrate how to sell gold and provide consumers with valuable tips.

GoldFellow® is a nationwide buyer and refiner of precious metals purchasing gold, silver, platinum and diamonds from consumers via its website, retail locations and peer-to-peer marketing.  The company which brought best practices to the cash for gold industry maintains an A+ rating from the Better Business Bureau.  Its executives have contributed to stories about gold selling for news organizations including: CBS, ABC, NBC, CNN, Univision and NPR.