Everyone likes a happy ending.

When consumers sell 14 Karat gold to online gold buyer, GoldFellow®, it’s unlikely they would conceive the unwanted gold jewelry they shipped off to the company in a FedEx® envelope to eventually be melted would have sentimental value to a GoldFellow® employee. But that is exactly what happened.

A few months ago GoldFellow® jeweler, Robert Borrego, was the subject of a Fort Lauderdale Sun Sentinel story about how he came upon a 14 Karat Gold charm he helped to manufacture at his first job 43 years earlier. The custom gold charm was about to be melted. After the story was published, the GoldFellow® corporate office received many phone calls from people who had read the story and watched the video of Borrego and the 14K charm. Several callers expressed the wish that the company would not melt the 14K charm which clearly had sentimental value – not to the person who wanted to get cash for gold – but to the 69 year old jeweler who was reunited with a piece of his past! Others wanted to buy the 14 Karat gold charm which is a custom piece containing diamonds, a message of love in French and personal engraving on the back. Some suggested GoldFellow® simply give the scrap gold charm to Borrego as a memento. Unbeknownst to all the well intentioned callers and to Borrego himself who stated in the newspaper story that he would keep the charm around for a while and then eventually melt it, GoldFellow® executives had other plans. 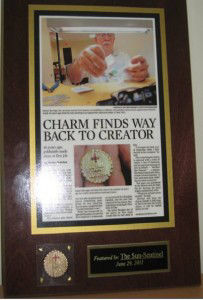 Working with Tampa, Florida-based In The News – a company which specializes in mounting and laminating news stories, GoldFellow® prepared a surprise presentation for Borrego. GoldFellow® founder Michael H Gusky who employed Borrego for many years in his previous company, presented Borrego with a custom plaque which included the Sun Sentinel story – and the actual 14 Karat Gold charm, safely placed behind Plexiglas.

“I was stunned,” said Borrego shown below in a photo with GoldFellow® president Steve L. Hansen. “I never expected this. My wife and daughters were so excited GoldFellow® gave me the charm. It was so nice of Michael and everybody. They made such a big deal and called everyone into the office and made speeches.”

It seems the story about a 69-year old Cuban born jeweler finding a piece of 14K gold jewelry he worked on when he was a 19-year-old apprentice stone setter and engraver at a now-defunct New York City jewelry manufacturer resonated with the employees at In The News.  They went out of their way to design the plaque to best display the 14K charm.

“Every few days they would call and float another design idea. Then they hit on this,” said Gusky who has known Borrego for twenty years. “They seemed to really take an interest in making this presentation perfect for Robert and really took their time to get it right. But it was worth the wait. This is beautiful!”

The 14 Karat gold charm that lost it’s meaning beyond its cash for gold value has found a new home with Borrego.  Borrego says he will always be reminded of his first job manufacturing custom 14 karat gold jewelry as a young Cuban immigrant in New York  – and of his friends and family at GoldFellow® for making such a beautiful memento for him.